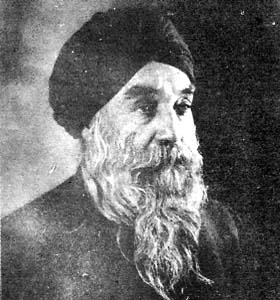 A life well and fully lived… 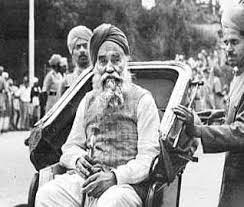 Master Tara Singh (24 June 1885, Rawalpindi, Punjab – 22 November 1967, Chandigarh) was a prominent Sikh political and religious leader in the first half of the 20th century. He was instrumental in organizing the Shiromani Gurdwara Prabhandak Committee, in organizing Sikhs politically, and guided the Sikhs during the Partition of India, and later led their demand for a Sikh-majority state in Punjab, India.

Tara Singh, who became the dominant figure of Sikh political scene in the twentieth century, was born a Hindu. His interest in Sikhism awakened when a boy and he formally converted to Sikhism at age 17, along with his elder brother and a cousin.
At Khalsa College, he developed an abiding interest in politics. He was the President of the Students Agitation Committee during the Sikh resistance to attempts by the British government to exert greater control over the Khalsa Colleges.
At graduation from Teachers Training College at Lahore, he offered his services at the nominal income of 15 rupees a month if a new Khalsa school was opened in Lyallpur. The offer was accepted and he became headmaster of the school. Thus, he acquired the honorific “Master.”

In 1921, his involvement in politics took a serious turn. It was the time of the totally non-violent Sikh agitation to wrest control of the historic gurdwaras from the corrupt managers appointed by the British government. He was arrested several times. This battle was won.

Shiromini Gurdwara Parbandhak Committee (SGPC) was formed in 1926, and he became its Vice President.

The SGPC worked intimately with the dominant political organization in India, the Congress Party, in the non-violent agitation for India’s freedom and Tara Singh repeatedly spent time in jail. While interned, he was elected President of the SGPC.

Tara Singh retained control of the SGPC as well as of its political arm, the Shiromini Akali Dal, until 1962.

From the 1930’s until the end of his days, Master Tara Singh was involved in political activism – termed “agitation” in Indian independence movement parlance – almost without break.
First, it was against the British for the control of gurdwaras and appropriate legislative representation for Sikhs.

After Indian independence from the British in 1947, his energies shifted to agitation against the Indian government’s decision not to allow a Punjabi-speaking state in Punjab. Master Tara Singh won this war of attrition; a Punjabi Suba was formed in 1966, years after much of India had long been reorganized on a linguistic basis.

But, the governing Congress Party – which had already reneged on its promises to the Sikhs during the Independence struggle – was successful in giving but a freshly and further truncated shadow of a Punjab that had already lost half of its territory to Pakistan in 1947.
It was not an easy struggle. Several agitations were launched and headed by Master Tara Singh from 1955 to 1966. He spent time in jail, along with tens of thousands of Sikhs who courted arrest.

The most painful period of his life was around 1947, when India became independent of the British.
In the years before 1947, the fate of minorities like Sikhs and Muslims hung in the balance. After initial reluctance, the Muslim minority settled for an agreement with the Congress Party and partition of the country into India and Pakistan ensued.

As the smallest of the three communities, Sikhs relied on India’s assurances of a fair deal in a free country – an area in which Sikhs, too, would be able to “bask in the glow of freedom.” But these promises were soon forgotten. And Sikhs have become part of an India whose Constitution saved a few drops of ink and a line or two of text by mischievously lumping them together, along with other minorities, as Hindus.

This is a nation in which nascent Hinduism and their ethos – Hindutva – continues its steady march to diminish all minorities.

Master Tara Singh has been energetically vilified by more than a generation of Sikhs for perhaps being too naïve or gullible during negotiations with the British and Indian leaders on the needs of the minority communities that made up India. Perhaps Sikh leaders were indeed not sufficiently wily or alert.

Keep in mind, though, that they were negotiating with British statesmen of the first rank, and Hindu leaders like Gandhi and Nehru – the products of a first-rate British education. And Sikh leaders like Master Tara Singh were merely college graduates with limited or no experience with the sophisticated world around them.

Not that one can blame more astute adversaries for one’s losses, but history tells us that Sikhs and Master Tara Singh were blindsided.
Yet, Sikhs leaders did smell a rat, and refused to endorse the Constitution of India in 1950.

The irony of this shines through when one realizes that of all the people imprisoned for life or sentenced to death during India’s struggle for independence, fully two-thirds were Sikh. And Sikhs have never been more than 2% of India’s population.

Master Tara Singh’s heart was in the right place. He died in 1967.

He deserves an honorable place in the annals of the tumultuous 20th century.