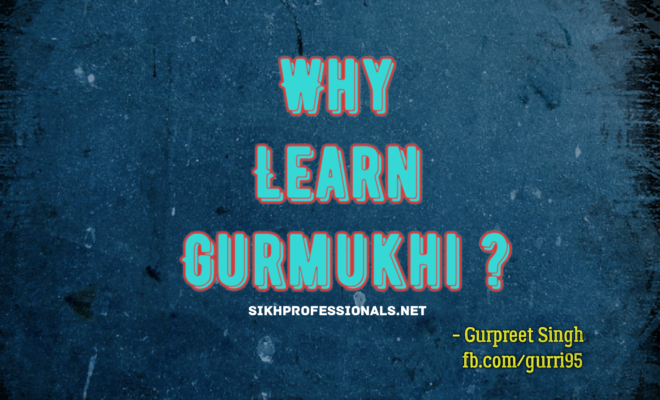 Every Sikh should Learn Gurmukhi. While most of the sikhs can read, write and speak Gurmukhi, there are still a number of sikhs mostly out of punjab who can’t even read Gurmukhi, Specially the current generation. The schools outside punjab don’t have “Punjabi” as a part of their syllabus, and the busy metropolitan lifestyle doesn’t allow parents teaching “Gurmukhi” to children.

But learning Gurmukhi is extremely important for a sikh. The Gurmukhi has been codified and designed by the Gurus themselves. The order of all the 35 alphabets is mostly same as Guru Nanak Dev Ji wrote on the patti at the age of 7 (in 1476).

Gurmukhi is very easy and logical to learn for masses. It is easier than Hindi, English and Sanskrit. Here in this article I will illustrate top 5 reasons to learn Gurmukhi. And why every sikh should use “Gutka Sahibs” inscripted in Gurmukhi to read the “Gurbani”.

1. It is Guru’s order to learn Gurmukhi.

You are a Sikh and it is Guru’s order (hukam) to learn Gurmukhi. Maharaj ji has ordered us to learn how to read, sing and write Gurmukhi. Gurmukhi is scripted and codifies by Guru Angad Dev ji maharaj himself. It has 35 alphabets and also known as paintee akhri.

Guru Angad Dev ji instituted literacy for all Sikhs in Gurmukhi. Gurmukhi script liberates us from islam and hinduism. The rehat maryada also says to learn Gurmukhi. Sikhs have always learned Gurmukhi e.g. Baba Banda Singh Bahadur ji, he was appointed a khalsa General by Guru Gobind Singh ji. He was not from punjab and became Sikh after meeting Guru ji. But he wrote all his Hukamnama’s in Gurmukhi, it means he learned Gurmukhi after becoming a sikh.

The translations we see on places, they are imperfect, because they are condensed, every pankti is condensed in one or two lines as you can not read a whole paragraph for every pankti.

Also the translations are bias, they are not the exact words of Guru ji. Some words can not be translated in english and also it depends upon the spiritual state of the translator.

The Gurbani losts its beauty in translations as it is written in poetry/hymns. Therefore, we need to learn the original words.

Transliteration is like a crutch which feels good in starting but after some time you know that you are injured and can not walk on your own.

The transliteration can not be used because there are more letters in Gurmukhi than in English (there are 4 D’s, 3T’s, etc. each sound slightly different). So how do you write that in English? We can’t. So whoever will be writing it will write it according to his pronunciation.

4. Pronunciation of Gurbani is better and correct in Gurmukhi.

The Gurbani can be pronounced correctly in Gurmukhi only. The vowels in Gurmukhi don’t match that of English.

There is no consistent transliteration system also. And some sounds dont even exist in English for example the letter “ੜ”. You can not fully understand the meaning without reading originally in Gurmukhi. The same word bhagat is written for two different meaning words, as worshipper (ਭਗਤ) and to worship (ਭਗਤਿ).

5. You will become independent to read Gurbani and do Sehaj Path.

By reading through transliteration you can never become independent to read gurbani. By this I mean if you have to do Sehaj Path from Guru Granth Sahib ji maharaj, you will not be able to read Gurbani from Maharaj’s Saroop. Because it is only in Gurmukhi.

Also, you can not take Hukamnama from Guru Granth Sahib ji maharaj as you are dependent on transliteration. So to read Gurbani from Maharaj’s saroop you have to learn Gurmukhi.

At last, I will request all the Sikhs to learn Gurmukhi, and read Gurbani in Gurmukhi. These are God’s words himself.

Guru Ramdaas ji is saying that O Gursikhs, know that the Bani, the word of the True Guru, is true, absolutely true. The creator Lord himself causes the Guru to chant it.

So we should learn these Guru’s words in the same way the True Guru’s chant it.