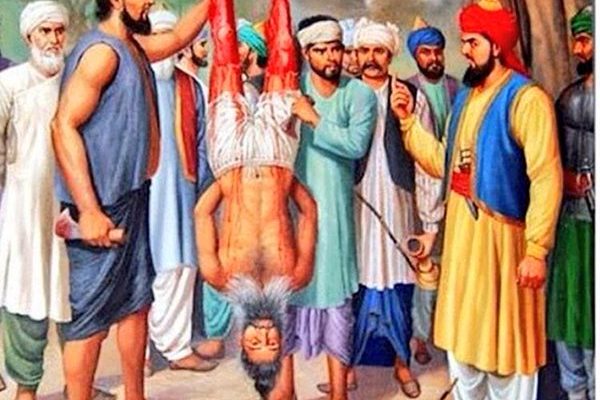 Sikh history is the most exclusive, unique, astonishing, baffling and great among the history of all the communities, religions, and countries in the World. We remember all the important aspects of our small but shockingly unmatched history of Guru Sahibans, Gursikh Warriors, Great women, Great and Supernaturally martyr Singhs and Bhujangis in our Ardas every morning and evening. The Gurmat ideology “Apna Bigaar Biraanaa saandai” is a great philosophy of fighting for right and truth, renunciation and sacrifice. Guru Nanak Dev Ji has inspired us to struggle and fight against injustice, suppression, persecution, oppression, bullying, and blind looting by saying,” Jo tau prem khelan ka chaao|| Sir dhhar tali gali merii aao||”.

Today we will talk about such a martyr Bhai Jai Singh Khalkat who did not bow down to the tyrant Mughal Subedar Abdus Samud Khan, who was a cruel, tyrant and brutal of an extreme level. He was skinned alive upside down for not transporting tobacco on his head.

Bhai Jai Singh was born in village Baran near Patiala, the name of the village at that time was Mughalmajra. His father was an Amritdhari Sikh and Bhai Jai Singh had also started doing Sewa with his father at a very early age. He was a fully devoted, honest and hard working Gursikh of Guru Gobind Singh Ji.

Abdus Samud Khan was appointed as the chief of his army at Sirhind. Everyone was very distressed and annoyed with his cruel and brutal behavior. One day in the Month of Chet in 1753 he was passing from Mughalmajra, he passed by Bhai Jai Singh but Bhai Jai Singh did not even bother as he was busy in meditating at his well. The Mughal Subedar ordered his soldiers to bring Bhai Jai singh to him and asked angrily that why he did not salute him. At this Bhai Jai Singh replied that I was not even aware of your presence as I was busy in meditating Gurbani.

At this, the Subedar said that I will punish you and your family for this once I reach Patiala. First, you pick up my baggage and carry it to Patiala for me. Bhai Jai Singh asked first to tell what is in the baggage only the I will take it to the Patiala. Kotwal Nizammudin became very angry on this and told him that it is the Hukka and tobacco of the Subedar. After knowing this Bhai Jai Singh very bravely but politely refused to carry that baggage on his head. The brutal soldiers started beating him with sticks and then Subedar asked him either carry my Hukkah or get ready to be killed. Bhai Jai Singh did not have any fear death so he stood firmly on his words.

Then Subedar changed his trick and told that what is in the Sikhi, don’t lose your life, accept Islam and be a Muslim and we will make you wealthy, you will go to the Heaven after death where you will get the angels and all kind of joy. At this Bhai Saheb recited the verse of Bhagat Kabir ” Kawan narak kiya surag bichaara santan douu raadae “, He said if after being a Muslim death will not come to me and I will become immortal then I can think about it for a minute but when death is the ultimate truth in every religion then why should I leave my Guru.

A Gurdwara Sahib is situated now at that place where people remember him every year and pay tribute to him.

A shayar has rightly said:

← Previous Story Why don’t Sikhs cut their Hair?
Next Story → 7 Amazing Facts about the Golden Temple