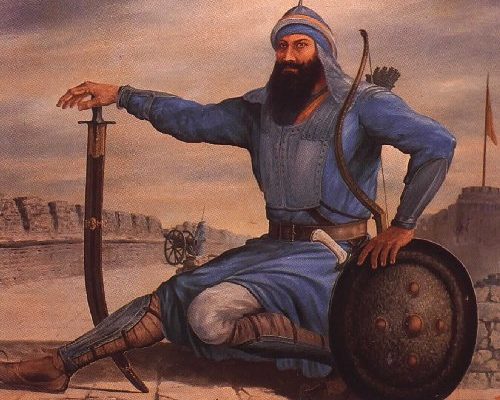 Baba Banda Singh Bahadur was the first Singh King who established Sikh rule in a large part of Punjab. Banda was born on 16 October 1670 at Rajori Village in Jammu. Lachhman Das was his childhood name. He was born to Rajput parents. He was very fond of hunting in his early life. One he hunted a she dear who was pregnant. The dying animal gave birth to two kids who also died along with their mother before the eyes of Lachhman Das.

He was thoroughly shaken by the incident and ovecome with grief, he renounced the world and became a Bairagi Sadhu adopting first one Janki Das as his Guru, and later some others, but none of them being true Guru, could provide him peace of mind. He turned to tantric sadhus and acquired some miracle powers. With the help of these miracles powers he was able to recruit a number of persons as his agent disciples. Through them, he established his popularity among the simple minded people around his Ashram on the bank of river Godavri. None benefitted from his miracles. He rather used those miracles to sub due and humiliate religious leaders and other famous saints of the atea who ever happened to visit his Ashram. Guru Gobind Singh ji while travelling towards South India from North along with some Sikhs, visited Lachhman Das’s Ashram and in his absence, sat on his beautifully decorated cot.

On his return to the Ashram, Lachhman Das could not tolerate Guru Gobind Singh ji occupying his seat. He along with his disciples tried all their tantric miracles to overturn the cot occupied by Guru Gobind Singh ji, in order to humiliate and punish him for his daring act but failed to cause any harm to the new unknown visitor. No trick worked on the Guru. He kept sitting on smilingly.

Accepting defeat, Lachhman Das Bairagi fell at the feet of Guru Gobind Singh ji and asked forgiveness and said, “O, Guru Ji, I am your Banda (Slave)”. Show me light and put me on the right path. I am at your service and am prepared to do anything at your bidding.

Guru Gobind Singh ji taught him the basic principles of Sikh religion and administered Amrit to Lachhman Das, admitting him to Sikh fold. The Guru renamed him as Banda Singh. Guru Ji’s Amrit changed Lachhman Das’s life completely. He was no longer a wicked bairagi troubling humiliating innocent people, but was now a brave Sikh of the tenth Master.

Guru Gobind Singh ji sent Banda Singh on a mission to Punjab to punish the guilty and cruel rulers of the time. He was provided with five brave Sikhs as advisors. He was also provided with necessay weapons.Fully armed and accompanied by brave Sikhs and Guru Ji’s blessing, banda Singh proceeded on his mission towards Punjab. With the help of Guru’s Hukumnamas (Orders) to Sikh community to help and join Banda Singh in his assigned mission, thousands of armed Sikhs joined him. The rulers of Punjab were already well aware of fighting qualities of the Sikhs and were thus terrified to face them.

Within a short time, Sikh forces, under the leadership of brave Banda Singh, put to death many tyrant rulers, including Nazab Wazir Khan who was responsible for putting to death the two younger sons of Guru Gobind Singh ji in a most in-human manner. Cruel rulers and their associates were singled out systematically, picked up and punished for their crimes against humanity.

Banda Singh captured large part of Punjab and established sikh rule there. He minted coins in the name of Guru Nanak Dev Ji and Guru Gobing Singh ji, In the meantime, Faruksaiyar became the Emperor at Delhi. He was angered by the defeat of Mughtal forces at the hands of Banda Singh everywhere. He sent a large force from Delhi and mobilised forces from eleswhere in Punjab to defeat and capture Baba Banda Singh.

The Sikh forces were ultimately beseiged by overwhelming number of Mughal forces in the fortess of Gurdas Nangal. The Sikhs fought valiantly under the leadership of Baba Banda Singh inflicting heavy casualties on the Mughal army. However, due to prolonged encircling of the fortess by superior number of forces, the Sikh forces were left with no rations. They were forced to eat tree leaves to sustain themselves. Due to this, they became too weak to fight the enemy.

Ultimately, the brave Sikh general Baba Banda Singh Bahadur was arrested along with seven hundred Sikh soldiers and brought to Delhi, where they were mounted on ponies, insulted and paraded in the Bazars of Delhi.The Sikhs were offered amnesty if they accepted conversion to Islam. Not one among them accepted this offer of lease of life. As such they were tortured and done to death publicly. They died in high spirits, sticking to their faith.

Finally, before Baba Banda Singh was butchered most mercilessly by the tyrant rulers, his four years old son was put to death in front of Baba Banda Singh, by cutting open his abdomen. His heart was taken out and thrust into the mouth of Baba Banda Singh. But even this most inhuman and cruel act of tyrant rulers failed to break Baba Ji’s resolve and determination. He remained composed as ever. Finally, he was put to death most mercilessly by pinching the flesh from his body, bit by bit, by means of heated pincers.

On 9 June 1716, Banda’s eyes were gouged, his limbs severed, his skin removed and then he was killed.Baba Banda Singh Bahadur thus became a martyr. A Bairagi, having become an Amritdhari Sikh, committed himself to live as a protector of the rights of the people. He offered his own life while fighting the tyranny of the state.

Thus came to an end and eventful chapter of Sikh History when the tyrant Mughal rulers tasted defeat after defeat for a number of years at the hand of Sikhs under the leadership of the first Sikh General Baba Banda Singh Bahadur. The Guru thus demonstrated to the people the true strength of mind and body of those who had partaken Amrit and how a Bairagi who was notorious and aimless, could turn out to be a brave person with credible achievements.

Though his rule was short-lived, reforms brought about by him still exist today. Banda Singh demonstrated that the people have within them, the power to topple tyrannical rulers.