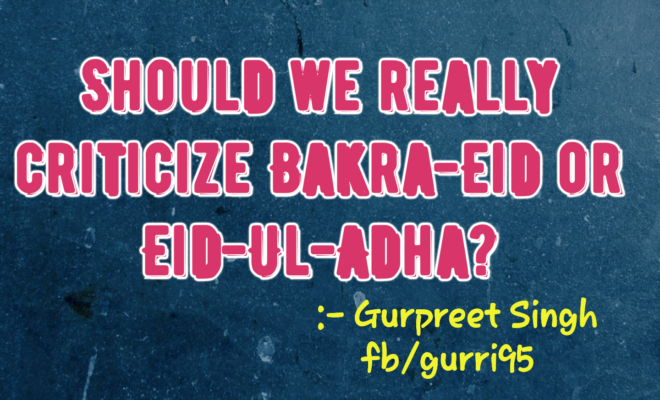 Should we really criticize Bakra-Eid or Eid-Ul-Adha?

Should we really criticize Bakra-Eid or Eid-Ul-Adha?

I have been observing from last few days people criticizing Bakraeid. My timeline is full of posts and comments criticizing bakraeid by saying it cruelty against animals. Then i found a post, in which the writer was giving logics about his condemnation of Bakraeid. He said that they opposes wastage of water on holi or the noise and air polluting crackers so in same sense killing of animals on Bakra-Eid (Eid-Ul-Adha).

I wanted to express my views and what i feel on this topic and thought of writing this article. So here are my views.

I’m an amritdhari sikh, and compassion is the very first element of sikhism’s. Guru Nanak Dev ji in Gurbani says,”Dhoul dharam daya ka poot (Ang-3, Shri Guru Granth Sahib Ji)”which means that “the dharma is the son of compassion. Dharma emerges from compassion”. Actually the whole concept and ethics of sikhism are based on compassion. And killing for the taste of your tongue is not compassionate at all.

But i have a contradiction with the above said facts which people are using to cruticize Bakra-Eid. Talking about holi, we don’t waste water by throwing on each other everyday, like we do on holi. I think you all are very well aware about the importance of saving water at present. Same about diwali, nobody burst crackers everyday, and neither it is written anywhere in our scriptures to burst crackers. I think this could be the reason that some so called pseudo liberals (the term used by the criticizers) say not to do or limit doing these things on our festivals. As it could make a positive impact on our climate.

But it is ridiculous and illogical for me to understand when some extremely gyani (intelligent) people talk about the bloodshed on Bakra-Eid and are worried about killing of animals. The reason why i think like this is because Bakra-Eid is not the only day when people kills animals. Every 3 out of 4 Indians eat non-vegetarian food which they get by the slaughter of animals. There are large number of restaurants at places like old delhi where tonnes of chicken, mutton, and beef is being consumed everyday.

Every city has huge mumber of meat shops which sells thousands of kgs of meat everyday. The people talks about polluting water while sacrificing goats on Bakra-Eid but in reality water is already being wasted and polluted every single day by people who slaughter animals to sell. Companies like KFC are making hundreds of crores by selling non-vegetarian food in india. If you search on youtube you will get number of videos on how these companies exploit animals to produce meat. Even sometimes the producers of meat keep animals alive while skinning and cutting them.

So the cricization of killing animals at Bakra-Eid only is illogical. It could be logical if majority of our people stop eating non-vegetarian foods and killing animals for the same.

What could be the agenda behind criticizing Bakra-Eid?

Actually, believe it or not the real reason/agenda behind criticising Bakra-Eid is to criticize muslims. I have been observing it from many days that the feeling of hatred against muslims is being increased day by day. Yes it is the reality, we have to accept it. And believe it or not the background of our current leading political party has helped a lot in the growth of this hatred. I am not saying  that the current leaders are against muslims or doing anything against them. But the background and image of the leading party and the support of variuos extremist groups is the reason.

So at last i will only say, If we think that stoping something for one day and doing it for the rest 364 days of the year is gonna help our environment than you need to think again. Also the muslim who have slaughtered an animal on bakraeid will not have to buy meat atleast for a weak. So for the next one week the number of animals slaughtered will be less. Which balances the overall number. Jokes apart. 75% of our people eat meat, but opposing only one community is just a hypocrisy. We should think before criticizing someone.