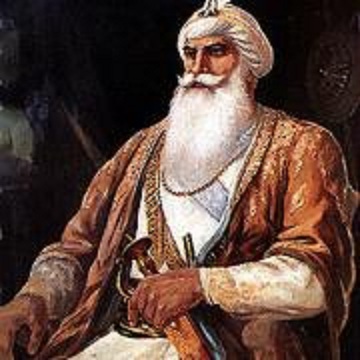 Under the supervision of Mata Sundar Kaur Ji, he received education in persian language, mathematics and religious education. 7 years later, as per Mata Sundari ji’s orders, he was sent to Punjab, where he came in contact with Nawab Kapur Singh and the young man Jassa Singh was considered to be Nurab Kapoor Singh as his religion’s son and a skilled warrior in horse riding, archery.The misls of the entire nation were formed on the 29th of March 1748, to collect Sikh power. Jassa Singh was elected joint leader of all the misls along with the head of the Ahluwalia misl, and the group of all misls was called Dal Khalsa, so he was the head of Dal Khalsa.

Under the leadership of Jassa Singh, the Dal Khalsa took over Lahore, the capital of Punjab, for the first time, in 1761.  They were the masters of the city for a few months and minted their own coins in the name of Guru Nanak.  Because of his services to the Khalsa and bringing them this success, Jassa Singh was honored with the title of Sultan-ul- Kaum, the King of the Nation.

Under his leadership, Sikh troops sailed many campaigns. Jassa Singh Ahluwalia fought for 50 years of his life with the Mughals and won most of the victory. In 1746, during the large sloganeering of Kahnuwan in the Chhota Ghallughara and in 1762, there were Bahadar generals Sardar Jassa Singh and Nawab Kapoor Singh who took the fists with Mughals. In 1777, Jassa Singh Ahluwalia conquered Kapurthala and made him the capital of Khalsa. 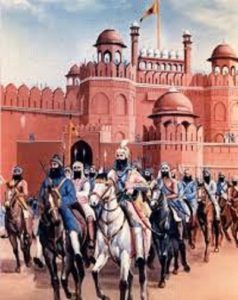 The high character of the Sikhs and their bravery are documented by an eye-witness and translated below:

These comments are from the pen of Qazi Nur Mohammed, who came to Punjab with Abdali.  These words are very significant because the Qazi was present during many Sikhs battles and himself was an enemy of the Sikhs.

Jassa Singh defeated the Mughal rulers like Nadarshah, Mir Mannu, Zakariya Khan, Adin Baig, Salabat Khan, and even then attacked the Asia’s biggest rider and Ahmad Shah Abdali. He swore Delhi with his sword, and gave the state of Punjab the heirs of Punjab, which is why the Sikh misls ruled Kangra, Multan, Saharanpur and Attock. Apart from this, the present building of Sri Harmandir Sahib was also raised. Jassa Singh Ahluwalia had built, gold service was later given by Maharaja Ranjit Singh by Sher-E-Punjab.Jassa Singh had conquered both the great cities that had glorified Sikh Gurus, Lahore and Delhi, and again won the Sirhind, Karam gave the name of Sirhind to Sahibzada Fateh Singh in the name of Fatehgarh Sahib Jassa Singh. Jassa Singh was the Jathedar of Buddha Dal, Sultan-ul-Kum, chief of Dal Khalsa and Sri Akal Takhat Sahib at the same time.

Jathedar Jassa Singh Ahluwalia, honored as Sultanul Kaum (King of the Nation) was a devout Sikh.  He was not greedy and did not attempt to add more areas to his Misl.  Instead, whenever any wealth or villages came into the hands of the Sikhs, he distributed them among the Jathedars of all the Misls. Having lead the Sikhs through very trying times, Jassa Singh passed his last years in Amritsar.   With the resources available to him, he repaired all the buildings, improved the management of the Gurdwaras, and provided better civic facilities to the residents of Amritsar.  He was a contented man, having given his life for the cause of the Khalsa Panth.  He wanted every Sikh to take Amrit before joining the Dal Khalsa.  It were his actions as a true Sikhs that kept the Khalsa united and helped them to become a power in the Punjab.

In the memory of that great warrior, the Government of India had issued a postage stamp in 1985, but no memorial has been created till now. Sardar Jassa Singh Ahluwalia had spent his last time at Darbar Sahib, died on 20 October 1783 at Amritsar, and his last cremation was done at the historic Gurdwara Baba Atal Rai, where the events are organized every year.There is a city block, Katra Ahluwalia, in Amritsar named after him.  This block was assigned to his Misl in honor of his having stayed there and protected the holy city.