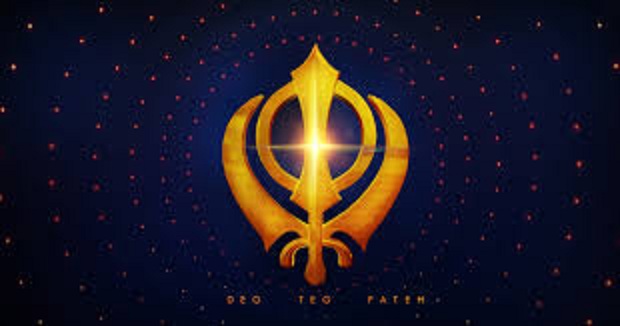 The Origin of word khanda, Khanda refers to the double edged sword shown below.

The Khalsa/Sikh symbol also known as Khanda is as below. As it has the khanda – sword shown earlier in center so symbol over all is called as Khanda.

The Khanda ( ਖੰਡਾ, khaṇḍā) is the symbol of the Sikh faith, that attained its current form in the early 20th century.

It is an amalgam of three symbols:

It depicts the Sikh doctrine Deg Tegh Fateh in emblematic form. It consists of three weapons and a circle: the khanda, two kirpans and the chakkar which is a circle. It is the military emblem of the Sikhs. It is also part of the design of the Nishan Sahib. A double edged khanda (sword) is placed at the top of a Nishan Sahib flag as an ornament or final.

Origin of Khanda symbol
The current Khanda began to evolve after the British occupied Panjab. A new battalion known as Rattray’s Sikhs which became 45 Sikhs of the British Indian Army was set up soon after 1849. The soldiers of this battalion used to have an insignia pinned on the front of their turbans that was just a circle or a chakar on the top of which there used to be a khanda standing upright with the handle of the khanda touching the upper edge of the Chakkar.

See a photograph of a Sikh soldier, Subedar of the Rattray’s Sikhs 1880 as below :

At the time of Maharaja Bhupinder Singh of Patiala, early in the beginning of twentieth century, a Royal Family Order of the State of Patiala was designed see :

This Royal Family Order of State of Patiala also has a crown attached at the top. The chakkar has inscribed on it he pharase ‘Tera Ghar Mera Ghar Assai’ meaning your house is mine house’ taken from a letter or hukamnama from tenth Guruji written to the Patiala ancestors of Maharaja Bhupinder Singh. The insignia is also known as Nishan-i-Phul or the insgnia in the name of Phul who was the founder of the Patiala Royal House.

Later on enthuusiastic Sikhs borrowed this idea from Nishan-i-Phul and the idea to pin on the front of the turban from Rattray’s Sikhs and other Sikh Regiments in the army. They designed the current Sikh khanda by getting rid of the inscription, removing the crown on top, and matching the size of the two kirpans to the size of the Khanda. The Panch Khalsa Diwan followers and some of Bhai Randhir Singh Jatha who were also known as Sarblohias began decorating the front of their dastars with the new Khanda insignia.

The Emblem of Iran is as below :

On Wikipedia it says “Arabic word Allah (“God”), rendered in stylized characters from the Persian alphabet. The logo consists of four crescents and a sword. The four crescents are meant to stand for the word Allah”.

Here is an interesting Conspiracy Theory on Sikh-Iranian link: Similarity between the “Khalsa” symbol and Iranian flag, which is supposed to be a calligraphic form of the word “Allah”. Now, this symbol was picked by Ayatollah Khomeini. Khomeini’s grandfather was an immigrant from India, and had the surname “Hindi”.

Ayatollah Khomeini who was born in Punjab, India changed the name of Persia to Iran after the Shah was overthrown in 1977 and also insisted that the Sikh flag emblem be put on the Iranian flag(a reference to his own origins).Khomeini was well known to have been influenced by Sikh culture and the Sikh religion (which was relatively uncontaminated during his time).

The Sikh flag consists of two sabres over a broadsword and a Sikh Chakkar (an iron ring worn on the head of warriors). The Sikh Flag is called the Nishan Sahib (“The Respected Mark”).

← Previous Story Why don’t Sikhs cut their Hair?
Next Story → Some Facts about Gurbani Kirtan