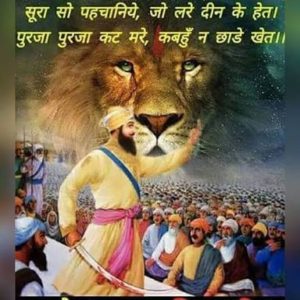 “Is there any loyal Sikh who will give the gift of their head.” Guru’s powerful voice shocked people to their bones. Again Guruji roared “who will give their head.” Without hesitating hand clasped together. A man named Daya  moved towards Guruji saying “Guruji, my head is yours”. Guruji take him to  and after a while sangat saw blood coming out of tent.

Most people were scared and some felt vibration of heaven. Guruji raised his sword, blood dripping from it. Again he roared ” Give me another head”. Another man Dharam chand came forward. Guruji did same as before. Guruji called three more men, Himmat, Mohkam, and Sahib offered their head.

The truth is we are not fully alive until we live beyond fear of death. Next, a large bowl was brought and water was poured into it. Guruji put his double edged sword in bowl and started stirring and sing ” IK ONKAR SATNAM KARTA PURAKH NIRBHAU, NIRVAIR, AKAL MURAT, AJOONI, SAIBHANG, GURPARSAD JAP, AAD SACH, JUGAAD SACH, HAI BHI SACH NANAK HOSI BHI SACH..” And recited all 5 nitnem Bani’s while stirring. Guruji’s wife Mata Sahib poured sugar sweets in to nectar. 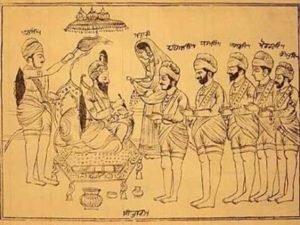 On that day thousands of men become royal lions and thousands of women become Graceful princess. The Khalsa had been formed and is celebrated as baisakhi on 13th April. 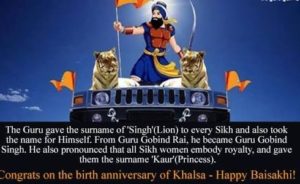 Next Story → Sikh Woman – Who Deserve To Be Known