Sikh of the Year 2014 is Ravinder Singh (Founder Khalsa Aid)

There were many nomination for the ‘Sikh of the Year 2014’ award but the one who stood out the most is Ravinder Singh, CEO of Khalsa Aid.

Ravinder Singh has been honored with ‘The Sikh of the Year 2014’ Award in Amritsar. It is a tribute to “Ravinder Singh” who worked sleeplessly in improving the health and lives of people affected with poverty, war and natural disaster. He is also known to be Courageous, inspirational and selfless person.

He begins his journey as a Humanitarian Aid worker in 1999, and started a nonprofit relief aid organization named “Khalsa Aid” which works toward providing assistance to victims of wars, flooding and natural disasters worldwide. Khalsa Aid has launched over 25 International Emergency Relief Missions over the last 14 years and raises the awareness of Sikhs beliefs and values worldwide.

He started his first mission in Albania/Kosovo border where Khalsa Aid Provides Assistance to displaced victims of Civil War & genocide. In his second mission to Turkey (1999) when devastating earthquake struck Northwestern Turkey, he provided a thousand pairs of garments and water purifier to the affected people. Since then humanitarian aid has been provided to suffering communities in Orissa (2000 cyclone), Gujarat (2001 earthquake), Rwanda (2002 volcanic Eruption), Dhaka (2007 cyclone) and many more. The complete list of numerous Relief aid projects can be accessed here.

Ravinder Singh, CEO of Khalsa Aid praying with the orphans in Haiti before they eat their evening meal. 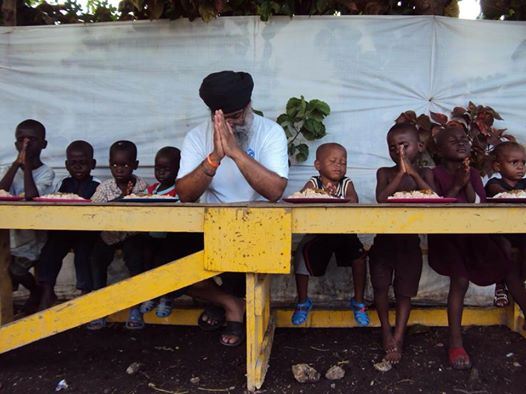 Recently, his relief work was recognized on the UK national television show “Surprise Surprise”. He was rewarded for his extraordinary commitment towards providing the relief aid to Burrowbridge, Somerset, during the flooding there.

During interview with the host Holly Willoughby, he said

“I am a man of action, I don’t do meetings, I don’t sit round tables, I see what needs doing and I do it”

We Salute to Ravinder Singh and every member of the Khalsa Aid team for their hard work, commitment, courage and dedication towards helping the people in need. You guys are real saviors.

A true reflection of how a Sikh should be, infact a Khalsa should be.

The aim of the Sikh Professionals and Entrepreneurs group is to strengthen the Sikh community by connecting, sharing, helping each others and Succeed.